Hi Chad. I’ve read some of your past articles where you say just 1 set to failure is enough to stimulate maximum muscle growth. I can’t see myself doing just one set on an exercise. I typically do 4 or 5 sets to failure per exercise.  Even if it was effective, I don’t think mentally I would be able to handle being in the gym for such a short period of time. Obviously, it works for you, but do you really think that doing just 1 set per exercise is going to work for most people?

It boils down to how efficiently an individual can establish a mind-to-muscle connection that allows him or her to tap into the maximum amount of available muscle fibers, and then generate enough force to spark an adaptive response which ultimately leads to muscle growth. Additionally, pain tolerance is a very important factor in this denominator known as INTENSITY.

Throughout my career, I’ve met people from all over the spectrum when it comes to training intensity. There are some individuals who will terminate a set of curls at the first sign of discomfort, then cry about it for a while before they rush home, gulp down 4 ibuprofen, all while sitting in front of the TV with a container of Haagen-Dazs watching Desperate Housewives. (Don’t laugh, I do really know people like this!)

On the other hand, there are people like myself who exert such an extreme amount of force upon their muscle fibers with just 1 set, any greater degree of intensity would likely rip the muscle right off the bone! This is the level of intensity that’s virtually impossible to conjure up on a daily basis because of the stress it places on the various subsystems in the body. 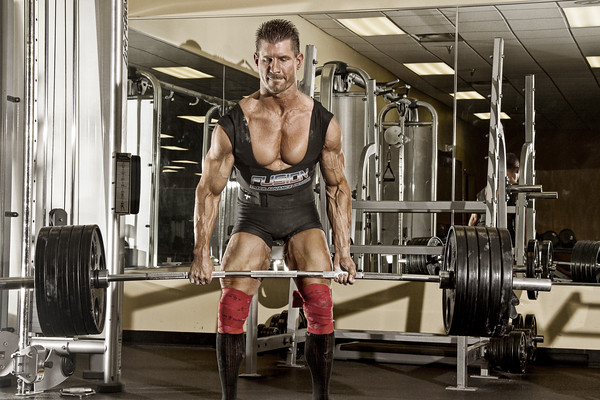 So you have these 2 extremes of training intensity with about 50 million other exceptions in the middle of the spectrum. Some people attack the weights like a guppy, while others attack the weights like a great white shark. That being said, an individual who attacks the weights like a guppy is NOT going to accomplish much with just 1 set. People like this will definitely need to incorporate more sets to stand any chance of triggering even a slight increase in muscle mass. Even individuals who operate at an intensity level near the middle of the spectrum would require more overall working sets to manifest any noticeable progress.

Based on my observations, the average gym rat does train at a significantly high level of intensity. When they lift weights, I see them turning purple, grunting, cringing, sweating. However, months will go by without them making an iota of progress. That’s the slippery slope. The more intensely you train, the more brief and infrequent your workouts must become.

I’ve noticed many gym rats spending 2-3 hours in the gym, 6-7 days per week. I have no doubt they’re putting everything they have into their training. The problem is everything they have depends upon a number of different subsystems in the body that become depleted as a result of very intense training. This is where a limited amount is good, but too much will result in unwanted side effects.

It’s like someone trying to get a tan. Let’s say they go in a tanning bed for 20 minutes. That might be the perfect amount of exposure to manifest the tanning process. However, if that same individual fell asleep in the tanning bed for 2 hours, it would be counterproductive to getting a suntan. Instead, he’d end up looking like a lobster. It’s simply too much! It’s exactly the same thing with lifting.

This depletion involves all of your body’s precious biochemical resources that allow you to recover and grow. The rate at which your body replenishes these resources is strictly limited. In fact, there is no amount of nutrition or supplements that will compensate for the depletion associated with over-training. The only exception to that rule would be if someone was using steroids or other growth-inducing hormones. These drugs are very powerful and significantly alter the chemistry of the body. This is why many pro bodybuilders and athletes continue to rapidly build muscle mass, despite training for hours.

I always warn natural bodybuilders and athletes not to follow the same training and nutritional protocols as chemically enhanced athletes. That’s because it’s simply not going to work for them. On very rare occasions, you may find natural athletes with superior genetics and recovery abilities. These factors allow them to perform longer workouts and more intense sets than the ‘Average Joe’. People like this are far and few between though.

Alternatively, most people operate with more average recovery abilities. In short, this means they are more susceptible to over-training when they workout at a very high-intensity level. Just remember, the more intensely you train, the less lengthy and frequent your workouts should be. This is how you avoid overtraining…so your muscles can actually grow.

It’s tough for me to determine whether or not you’re doing too many sets. I don’t know what type of condition you’re in or how progressive your training has been. If you’ve gone the past several months without any noticeable changes in your physique, there’s a very good chance you’re overtraining. If that’s the case, you have an important decision to make. You’ll need to decide what’s more important to you: being in the gym all night or getting results. For me, that’s an easy question to answer, I love results. Plus, there are so many other things I’d rather be doing than hanging out in the gym all night!

Hopefully, I was able to answer your question. I wish you all the best of success in achieving your goals!