I was wondering if you could offer me some advice on how to get rid of my man boobs? My diet hasn’t been great in the past, but I’ve been trying to eat a little better over the past couple of months. I was eating a lot of fast food, but now I’ve been making sandwiches with deli turkey and whole grain bread. Veggies, not so much. But I have been eating a lot more fresh fruit instead of the candies I was having. Protein bars are good for snacks. I was also drinking 3-4 beers every night before dinner, but now I’m down to just 1-2 light beers per day. So, now it’s back up at the gym where I’m lifting weights and doing cardio 3 times per week now. I used to be much thinner than I am now, but even when I was thin I still had man boobs? I would appreciate anything you could suggest that might help. Thanks,

Hi, John. The issue of man boobs (gynecomastia)  is more common than you might think. Endocrine system abnormalities initate this condition. More specifically, low testosterone, high levels of estrogen, prolactin, and body fat. This is the ultimate ‘man boob’ trifecta! The good news is that in most cases this condition can be managed naturally, without requiring surgery. It’s really just a matter of understanding exactly what foods and other factors have a negative impact on your endocrine system.

For example, you said you were eating a lot of fast food. I’m happy to hear you’ve changed that! I want you to remember that fast food and processed foods are generally high in phytoestrogens. These are chemicals that mimic estrogen in the body and bind to estrogen receptors, thus initiating estrogenic side effects like increased body fat and the development of female like breast tissue.

Soybeans are the most notorious phytoestrogen containing food that people consume. Most people are oblivious as to how much soy they actually ingest. Food products like bread, cereals, protein bars, instant protein shakes, prepackaged meals, frozen dinners, pastries, crackers, granola bars, and processed meat products are generally loaded with some form of soy. In other words, you’re going to want to go easy on your whole grain bread and also make sure your protein bars aren’t made with soy protein isolate or soy period! The more you can avoid these types of food products, the better off you’ll be!

Also, beware of the many butter substitutes on the market. Most of them are loaded with one or more of these oils. As far as your hormones are concerned, you’re better off using real butter than any of these products. I personally use a butter flavored extra virgin coconut oil that I buy at a local health food store. I actually like the taste of even better than real butter! 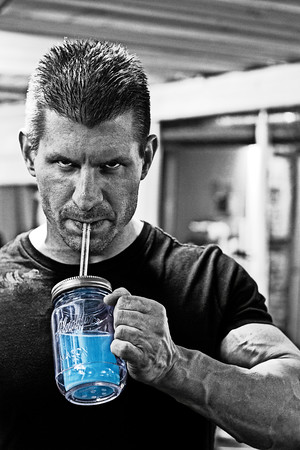 It’s also great that you’ve cut back your beer consumption. However, I implore you to cut it back even further. Beer is one of the WORST things you drink if you don’t want man boobs! The hops added to beer is a strong phytoestrogen, so it will emulate estrogen in your body the same way soy does.

To add insult to injury, the barely in most beers can increase prolactin levels in the body. Prolactin is the hormone females produce more of to increase breast size and promote lactation during pregnancy. Not only will this encourage the development of man boobs, but prolactin will also hammer down your testosterone levels! Anytime prolactin levels go up, testosterone levels will almost always go down. If you really feel the need for an alcoholic beverage, try a 4 oz glass of dry red wine like Cabernet or Malbec It won’t be nearly as detrimental to your hormones!

Vegetables Are A Must

I know you’re not a fan of vegetables. But, if you’re really serious about getting rid of those man boobs, there are certain types of vegetables you should force yourself to eat on a daily basis because it will help significantly! Narrow your veggie focus to primarily cruciferous vegetables, such as broccoli, cauliflower, kale, cabbage, Brussels sprouts, and collard greens.

These foods contain healthy chemicals known as phytochemicals that work to reduce estrogen production in the body by blocking the aromatase enzyme that converts your precious testosterone into estrogen. One of these phytochemicals, known as indole-3-carbinol, is especially effective for this purpose.

Something I think is also important to point out is the containers you eat and drink out of can also have a profound effect on estrogen levels in your body. Avoid storing food in or heating food in plastic containers. Same goes for bottled beverages. Avoid drinking bottled beverages or those stored in plastic containers. The same goes for food and beverages stored in aluminum cans. The reason is that plastic containers contain a chemical known as bisphenol A (BPA). This chemical is known as a  xenoestrogen which mimics estrogen in the body the same way that phytoestrogens do. Even more germane is the fact that BPA has been linked to many degenerative diseases like cancer and diabetes.

GET MY FREE TRAINING GUIDE!
(Click The Image Below.)

One more thing I would consider is taking a supplement to help support your natural testosterone levels and also combat excess estrogen in the body. Test Charge is such a product that will cover those bases. This is one of my “must-have” supplements! Based on user feedback, I know other men out there share these same sentiments.

I hope you find this information valuable and wish you all best of success with your health and future goals!

By the way, if you want a much more in-depth look at this subject, then make sure to also check out this great article over at Rigor Fitness.